Scott Stryker of Wilmington New York grew up fishing the Jersey shore for everything from trout to giant Mako sharks. He also started fly fishing the Ausable River at the young age of 11 years old back in 1976. In the year of 2000 his passion lured him to settle in on the banks of the Ausable where he has since been a licensed guide and instructor. He also spent several years tying flies and guiding for his old friend the legendary Francis Betters of the Adirondack Sport Shop..

With his flies being used to catch everything from trout in the Adirondacks to taimen in Mongolia, some have said that he is one of the "Adirondack's best kept secrets".

He has fished the Ausable River and has been an innovative tyer for over thirty years. His tying desk overlooking the banks of the Ausable River  has been an inspiration for his creative and artful flies. Although known for his Giant Pike and Musky flies to his intricate trout flies, he is also a tyer of realistic fly patterns as well and his flies are being used throughout the world. He is an author with a recent article  featured on  the cover of Fly Tyer magazine. He is a member of the Dr. Slick, Json:Sweden and Tuffleye Pro Teams as well as a member of the new Renzetti Legacy Tying Team. 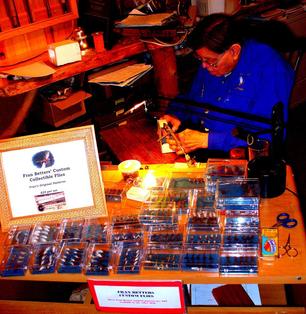